There are more than 1000 operational salmon farms along the Norwegian coastline, typically situated in fjords with important wild species and also where people live, work and spend recreation time. The government aims at further expansion of the salmon farming industry, and facilitate growth primarily in Northern Norway. However, fishers have repeatedly claimed that salmon farms prevent Atlantic cod (Gadus morhua) from using their traditional spawning grounds, and that this causes diminishing coastal cod populations. In the Salcod project, we aim to get a holistic view of the impact of salmon farming on wild cod populations. To achieve this, we will use a suite of different approaches, including acoustic telemetry, mark-recapture studies, diet, growth- and maturation schedules, examinations of juvenile habitat utilization and associated benthic community structures and how the latter is influenced by salmon farms. We will implement a before-after-control-impact (BACI) study design, working in northern Norwegian fjords with and without, and before and after, salmon farming. By doing this, we hope that we will be able to quantify the impact of salmon farms on cod survival, growth, migration, spawning and recruitment, and collate this in models, allowing us to make broad inferences about the underlying mechanisms and identify the pressures from salmon farming on cod populations, how they vary interannually and upscale the results to the population level. Altogether, this will merge into improved advice to government, industry and population about how to secure aquaculture growth concurrent with preservation of wild fish and sustainable fisheries.

Tracking fish with 3D acoustic telemetry is an important part of the project, and so far more than 400 cod has been tagged and released in the before salmon farm establishment scenario. The project was initiated in 2019 and is continuing into the after establishment phase during late 2022. Tagged cod has been tracked in the acoustic arrays containing about 150 receivers since the project start, and will continue to be tracked into the after-establishment phase while also new individuals will be tagged in the project. It is a pioneering project using YAPS for investigating wild cod responses to salmon farming activities – and a lot will be learned about general Atlantic cod behaviour as well. 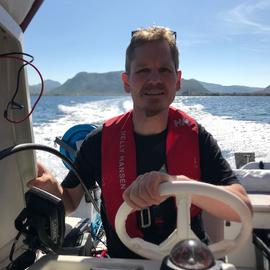